29 January 2018tip of the weekGermanaCD

It’s a question frequently asked by many foreigners, who want to learn our language. And in fact, when you really think about it, what better way to learn a new language than something fun and entertaining, like watching a film?

It seems like a dream, but there’s actually a scientific foundation in the idea. It appears that watching a film in the language that you’re learning helps you to speed up the learning process. This is because listening to Italian is fundamental for understanding better, as opposed to studying just the written language, how to properly pronounce words, idiomatic expressions, etc. Naturally, watching a film in the original language alone isn’t enough to learn Italian. There have to be both a good teacher and a good method of learning. Therefore, trusting a good Italian school for foreigners, you can be sure to achieve your goals in a much shorter time.

In Rome, for example, the best Italian school is the Clidante school, where the students have the possibility to study with prepared teachers in a stimulating and comfortable environment. The Clidante school, other than normal lessons, organizes also cinema outings to offer the students an extra way to learn. At school, we know well that movies can help foreign students to better memorize what they learn in class. And above all, developing an interest in the Italian cinema can also bring students an interesting and fun way to get even closer to the Italian culture, and thus understand the language even better.

For this purpose, lets look at the 5 Italian films you must see! Let’s start with a film by the great Italian director, Dino Risi. Il sorpasso, a film from 1962, is considered one of the first Italian “road movies.” The story is about an unplanned journey, the day of “Ferragosto,” that brings together two unlikely friends, an immature man in his 40s and a shy and polite university student.

Another Italian film you should see is Una Giornata Particolare by Dino Risi, an intense movie that tells the story of Hitler’s last day in Rome through the eyes of a homosexual person persecuted by the fascists and of a fragile and tired woman. The third film that we recommend to learn Italian is La Finestra di Fronte by Ferzan Ozpetek, the story of a young couple in crisis that meet an elderly man who has lost his memory. Another film is Pane e tulipani by Silvio Soldini. The story is centered on a woman who, forgotten by her family during a trip, arrives in Venice where she rediscovers herself and her meaning of life. The fifth and last film we recommend is Io non ho Paura by Gabriele Salvatores, that tells the story of a kid who lives in a small town in south Italy and, while on a bike ride, discovers something very shocking.

Selected Grid Layout is not found. Check the element settings. 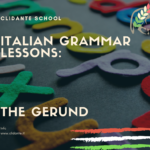 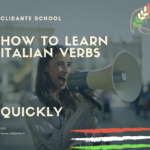 How to learn Italian verbs quickly

Italian language in the world

Studying abroad without moving from home